Meet Lucy, a new mini wizard helper monster over at my Etsy store

"When Lucy is not munching on gummy bears, she often finds herself wondering what it would be like if she was a ferry boat.  Would she be a modern chic one that shuttles city folk to grand country estates, or more of a mass passenger ferry who takes on transport and big tourists groups?   She especially likes to think about the dolphin friends who might make her acquaintance as she is traveling between harbors." 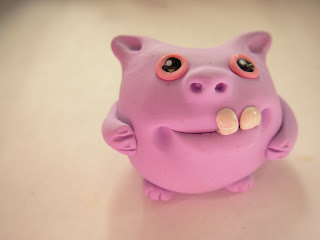 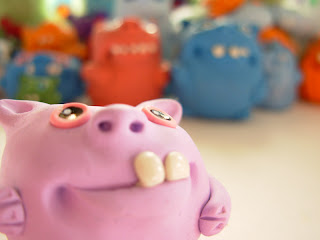 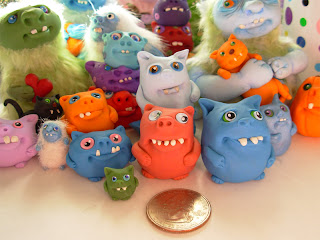 Lucy has taken up residence at the Etsy store while she waits for adoption.

Posted by HappyMoonBelly at 2:36 PM No comments:

Meet Charlie, a new addition to the family over at Etsy


"Charlie adores cozy things like fuzzy blankets, toasted marshmallows, a crackling fire and the soft underside of a sleeping kitty's belly. When he's not busy telling jokes to his friends, he's very industrious and clever about finding lost coinage around the house." 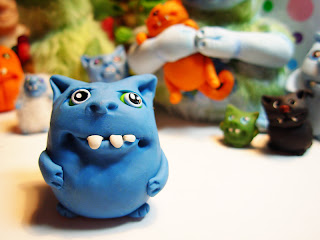 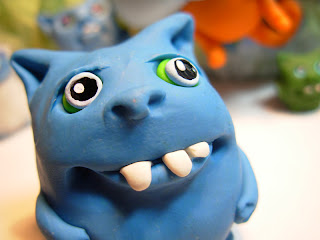 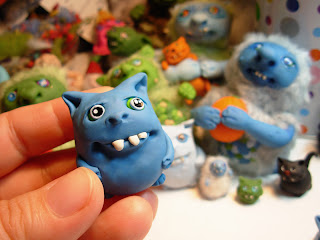 you can find him here:  Charlie on Etsy

Posted by HappyMoonBelly at 10:48 AM No comments:

I've been making some new monsters that will be showing up in the Etsy store over the next weeks of December.   I recently posted up this cute monster, Harry with his cat George, the real cat is my neighbor's pet.

Here is the tale of Harry and George:

"Harry and his cat George get on quite well. Harry found him at the local Beastiary Mart when his ex-girlfriend Kathy, who was looking for some fresh slugs for her pet crow Pearl, dragged him in there. As some moments go in a relationship, Kathy became very irritable and negative about Harry adopting George. Harry went ahead and did it anyway. Well, I'm sure the "ex" reference sums up how things went after George came home (though Kathy say's its because Pearl's nerves were becoming too frayed).
George enjoys being carried around since he has delicate paw pads that are sensitive to hot and cold. If he's not being carried, he hangs out around Harry's head, which is soft and fuzzy. He's very happy with Harry and the mini-portable heater that Harry puts out in the winter just for him." 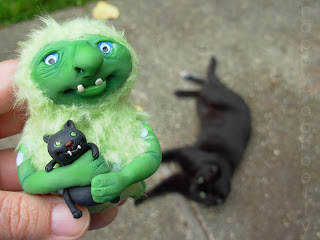 I've gone back and taken some new pictures of the older monsters that are still waiting for adoption, and I am playing around with some small stories about who they are and what they like.  Its been fun to imagine and create these little snippets of bio's about the monsters. 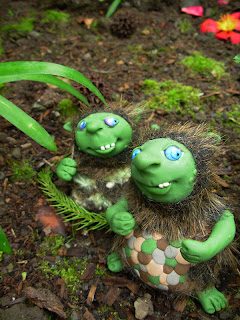 I also snuck in a group shot with some of the monsters I have: 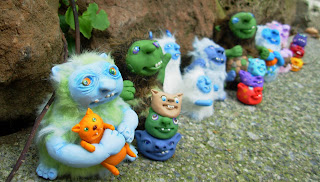 and last, but not least.....the goodbye November pumpkin wielding monster: 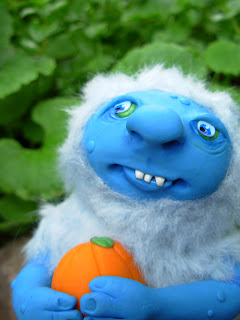 Posted by HappyMoonBelly at 1:27 PM No comments:

Welcome to my blog !

HappyMoonBelly
I am an artist who has worked primarily in the video games industry. I worked on The Sims and at Pogo helping with the Pogo Mini's. Most currently I worked for Zynga doing fun art producer stuff.